The NieR series is like nothing else in gaming. Each title is distinctive, unique, and infused with creator YOKO TARO’s weird and wonderful sensibilities.

When it comes to NieR:Automata and the recently released NieR Replicant ver.1.22474487139... (which will hereafter just be referred to as Replicant for the same of my poor typing fingers), the games may appear to be completely standalone - each has its own characters, enemies, and stories.

But actually, the NieR games are more closely linked than you might expect…

SPOILER WARNING! Be aware that this article contains spoilers for the NieR series. Turn away if you don’t want any of the surprises ruined.

Emil in a scene from NieR Replicant

It may not be immediately apparent, but NieR Replicant and NieR:Automata both take place in the same world. Their stories may be separated by a few thousand years, but there’s clear narrative connections between the two.

Some will be glaringly obvious to people who have played both games, while others require investigation and thought to uncover. Either way, they demonstrate that while each works as a standalone tale, they’re inextricably tied to one another.

Here are some of the connections you should watch out for:

Emil appears in both games…

In NieR Replicant you’re accompanied on your journey by Emil, a sweet-natured boy who’s afflicted with a condition that turns anyone he looks at into stone. Later on in the story, he undergoes a change into a new form with a very recognizable appearance.

Emil, as he appears in NieR Replicant

Thousands of years later, in NieR:Automata, that familiar face roams the Earth, attached to a trundling sales cart that provides services to the embattled androids of YoRHa.

Emil, as he appears in NieR:Automata

Those who play the original NieR adventure first may be surprised to see the character so reduced, and even more shocked by his apparent loss of memory.

By collecting Lunar Tears - another link, as these flowers are all over NieR Replicant - you may be able to uncover some secrets of the past and find out exactly how this situation came about. Suffice to say, nothing in YOKO TARO’s weird world is exactly what you expect…

…as do Devola and Popola

Character art of Devola and Popola from NieR Replicant

In NieR Replicant, Devola and Popola are important figures in the starting village, providing the protagonist with work and looking after his ailing sister Yonah when he’s away. As it turns out though, there’s a lot more to these twins than meets the eye.

Devola and Popola, as they appear in NieR Replicant

We don’t want to ruin the twists and turns of Replicant’s helter-skelter-like storytelling, so we’ll flash forward thousands of years to the events of NieR:Automata.

Devola and Popola as they appear in NieR Automata

Early in the story, 2B and 9S make contact with the pair at the Resistance camp - but why are the pair so ostracized and how do they relate to their namesakes from the previous game?

That’s something we’ll leave you to find out.

A screenshot from NieR:Automata

The protagonist of NieR Replicant makes many shocking discoveries over the course of the game, including the existence of Project Gestalt. The truth behind this scientific endeavor has massive implications for both the characters and their world.

NieR:Automata takes place in that same world, so naturally the effects are felt there too. You’ll find reports detailing Project Gestalt hidden around the world, and they’re well worth seeking out. Not only do they provide additional information about the initiative, they shine a light on the links between the two games.

Locations from NieR Replicant can be found in NieR:Automata

NieR:Automata may take place in the same world as NieR Replicant, but it is much changed. A few thousand years and an alien invasion will do that.

Even so, echoes of the past remain in the locations you visit. For instance, while exploring the Tower you’ll find an exact replica of the library that acts as home base for much of NieR Replicant. You’ll even find some information that directly references a character from the game.

The Library as it appears in NieR Replicant

The Library replica in NieR:Automata

Those who fully explore Automata’s wider world (and collect enough Lunar Tears) can also discover Kainé’s ramshackle shack, still standing after all these years! Fans of NieR Replicant may also hear a familiar theme play in this location too.

Kainé’s shack as it appears in NieR Replicant

There are references to places long gone too

Even if a location doesn’t appear in both games, there are times when remnants remain. Case in point: when you explore the desert region in NieR:Automata, you’ll notice that the machines there wear very distinctive tribal costumes.

Desert machine lifeform as it appears in NieR:Automata

This is a direct link to Facade from NieR Replicant - the residents of this desert city wear very similar garb.

The clothing of Facade from NieR Replicant

A bit of side-questing will also reveal that the desert in Automata is the same location where the Facade once stood. It’s good to see that while sand may have long since swallowed the city, it hasn’t been forgotten completely.

One of the coolest features about the NieR series is that the weapons themselves have stories. As you upgrade them, you’ll learn more about their past.

For example, Virtuous Dignity is a spear that can be wielded in both games, and its Weapon Story in Automata discusses its previous owners. Upgrade it fully, and you’ll find mention of a “meek young boy who wanted to aid his sickly younger sister”.

Hm… wonder who that could be?

Screenshot from the original NIER on Xbox 360

Another example of this is the Iron Pipe. It’s a weapon used by the player character at the very start of NieR Replicant, and it appears in Automata as well. What’s more, it’s story directly references Yonah.

But newer fans of the series may be confused, because it refers to Yonah as its wielder’s daughter, not sister.

Okay, settle down kids because it’s time for some NieR history.

When the original game released in Japan back in 2010, two versions were available: NieR Replicant and NieR Gestalt.

In NieR Replicant (the version that ver.1.22474487139... is based on), the protagonist is a young man, out to save his sister, Yonah. In NieR Gestalt, the lead character is much older, and Yonah his daughter.

The protagonist and Yonah from the NIER on Xbox 360

In the West, only one version of the game was released as NIER - and it was based on Gestalt. That means people in the US and Europe only experienced the original game’s story as ‘Father NieR’. It’s this specifically that the pipe’s story refers to.

Interestingly, if you switch the text to Japanese, it instead refers to the ‘Brother NieR’ as featured in Replicant.

If that all sounds very twisty-turny… well, that’s NieR isn’t it? You can get the full story in our series retrospective:

It’s not just the narrative that links NieR:Automata and NieR Replicant. There are all kinds of references and extras available that emphasize the connections between them. For example:

You can get NieR:Automata costumes in NieR Replicant

The protagonist from NieR Replicant wearing a 9S outfit from NieR:Automata

NieR Replicant ver.1.22474487139... launched earlier this year alongside the NieR Replicant 4 YoRHa DLC. This free pack adds four costumes and four weapons based on NieR:Automata to the game.

You can dress up Kainé as 2B, or the young protagonist as 9S and enjoy the sight of the beloved androids doing their thing in the world of Replicant. It even brings back their English and Japanese voice actors for extra authenticity!

You can play NieR:Automata’s soundtrack in NieR Replicant

The protagonist and Kainé from NieR Replicant wearing outfits from NieR:Automata

You can get NieR Replicant costumes in NieR: Automata Game of the YoRHa Edition

You can play dress-up in NieR:Automata too. The Game of the YoRHa Edition features costumes based on Replicant - 9S gets a Young Protagonist outfit, 2B gets a Kainé outfit and A2 gets an Adult NieR outfit!

You can customize your pod in NieR:Automata to look like Grimoire Weiss

What about a connection that goes the other way? As you’d hope, NieR:Automata features numerous references to the first game. A particularly good example is the Grimoire Weiss cosmetic item, which changes the appearance of your pod to that of NieR Replicant’s pompous tome.

It’s included in the NieR:Automata Game of the YoRHa Edition, which (SHAMELESS PLUG ALERT) - is available now!

One thing that both NieR Replicant and NieR:Automata have in common is the fact that the end… isn’t the end. 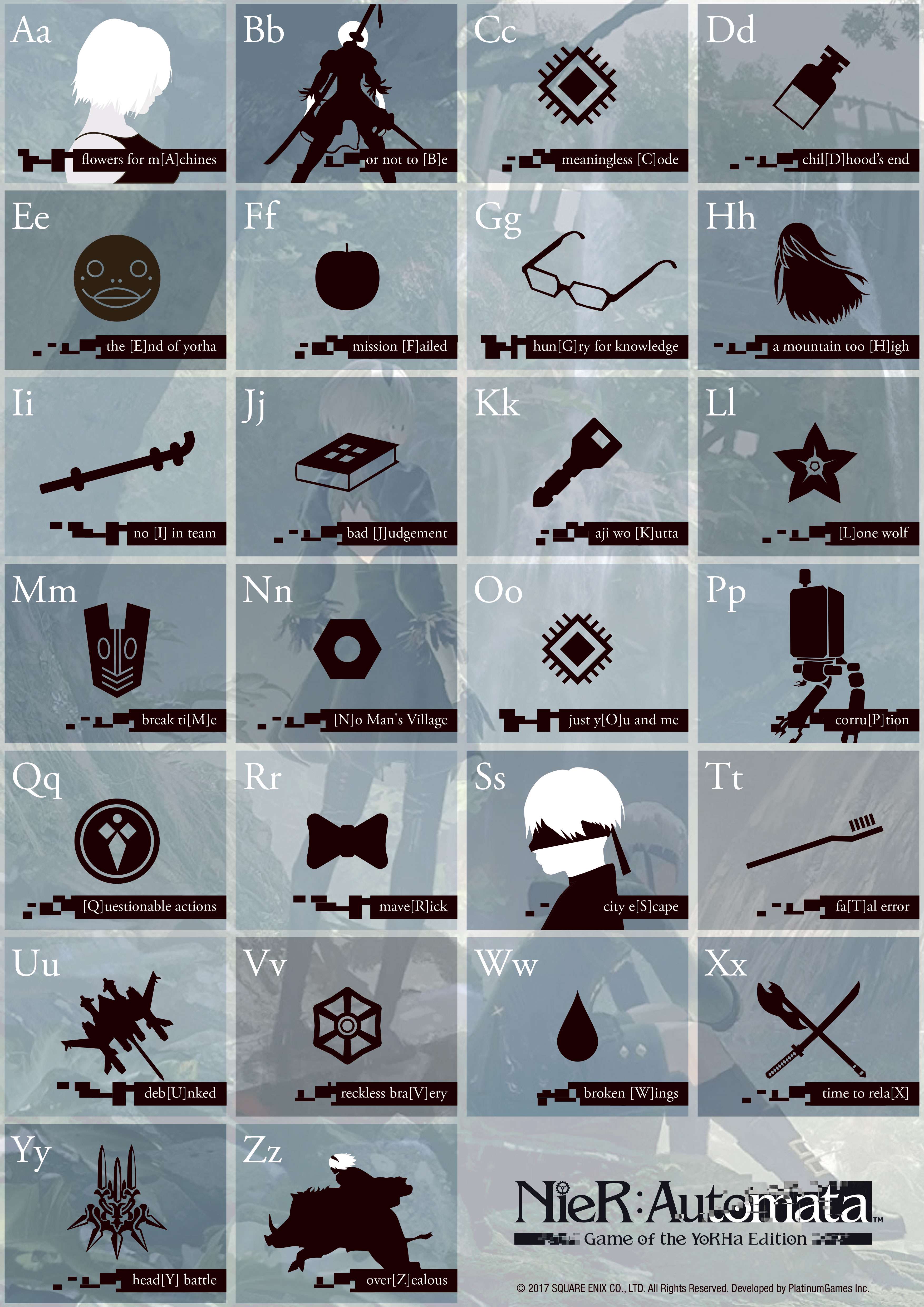 The A- Z of endings from NieR:Automata

The first time you see the credits, you may think the game’s over, but if anything, it’s just getting started. Subsequent replays add to the tale with new events, and peel back reveal more and more layers to the narrative. You’ll get to play as different characters, explore new environments and much more.

Seeing all the different endings and achieving the story’s true conclusion remains the goal across both games, so if you’re new to the series bear that in mind.

Even though the NieR games each feature their own unique stories and characters, they’re much more closely linked than you would expect at first glance.

The links are subtle - each game is designed to be enjoyable in its own right with no prior knowledge required - but they are there. For those who have played both games, uncovering these various connections is a rewarding puzzle that reveals just how intricate and thought-out this series really is.

If you’re yet to experience a NieR game, then now’s a perfect time to jump into the wonderful weirdness and see exactly why they’re so acclaimed. If you need convincing, you should check out our various blogs:

Finally, to stay up to date with news and information about the NieR series, make sure you follow it on social media:

There are big savings on Square Enix games right now!